Middleton Cheney Football Club’s first recorded game was played in 1884 against the neighboring village team of Kings Sutton Ramblers. Middleton won the match 3-1, and this started a long tradition of derby games between the two local rivals, with matches being played on either Christmas Day or Boxing Day at alternate venues each year, which carried on up until the late 1990’s.

While the Lord Jersey League was founded in 1894, there was no record of Middleton entering, although local teams from Kings Sutton, Heyford, Fritwell and Ardley all played (they were all connected by the railway in those days). However there is record of a match between Middleton Cheney and Byfield where all of the players walked to Byfield to play and then walked back afterwards. One wonders how many players would do that today!

Men’s football was being played in an unstructured fashion in the years leading up to the 1st World War on a field in Astrop Road, beyond the current playing field. A little later, a field close to the Primary School on the site of the Dands Drive estate was used, with The Red Lion public house provided the changing room. At this point the younger men of the village were finding it difficult to break into the side, so they got together and formed their own team — “The Flashlights”. 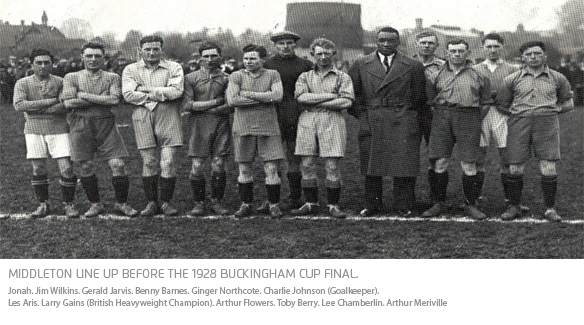 In those days The Red Lion was also the location for the weekly committee meeting, where the following weekend's team would be picked. The practice of picking the team through a committee continued into early 70s, after which managers were appointed, proposed and seconded by a committee at the start of each season — as is still the case today.

There is little record of local football between the two World Wars, but the side was going strong during the 1940s with well known village names receiving a mention in the Banbury Guardian; Christie, Gibbard, Fortnum and Barnes to name but a few. There was even a record gate attendance of 2,400 at Banbury United’s Spencer Stadium in 1947 for the Banbury Charity Cup on Whit-Monday night, the gross takings exceeding £130! Middleton retained the trophy. 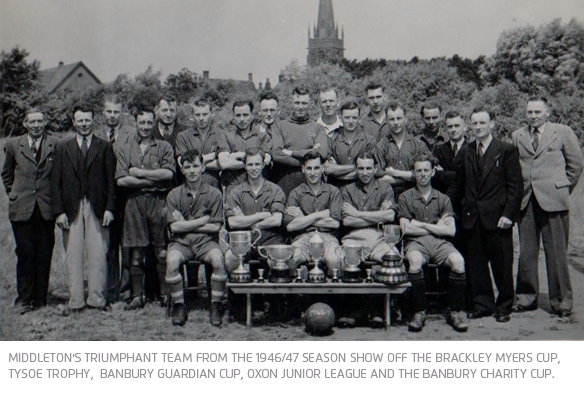 In those days, Middleton were playing in the Oxfordshire Junior League, in which they remained right up to the early 1960s when the Banbury League was formed and Middleton entered a reserve side. As the village was developing, a youth team was formed and entered in the South Northants Junior League playing on Sundays. A well known name, Alistair Markham (Chairman of the Social Club) no doubt paving the way for 40 years of involvement in sport in the village.

Much progress was made during the 1970s with Middleton boasting 5 sides, 3 senior teams and 2 junior teams at U14 and U16. The 1976/77 season was the most successful season in the history of the club. The first team won the North Bucks Premier League, the Byfield Bethel Cup and the North Bucks Premier Knock-Out Cup. The Reserves won the Mid-Oxon Jersey Cup and finished mid-way in the Lord Jersey Division 1. The Third Team won the Arthur Crawford Cup and the Sunday side won the Wakefield Trophy and the South Northants Cup.

In the early 1980s, the Club moved back into the Banbury League, continuing to run 3 teams with the First Team winning silverware most years, including the 1985/86 season when they won the Alan Hughes Cup, the Tysoe Cup, the Coronation Cup and also became County Champions by winning the Northants Lower Junior Cup - arguably the greatest achievement in the club’s history to date. 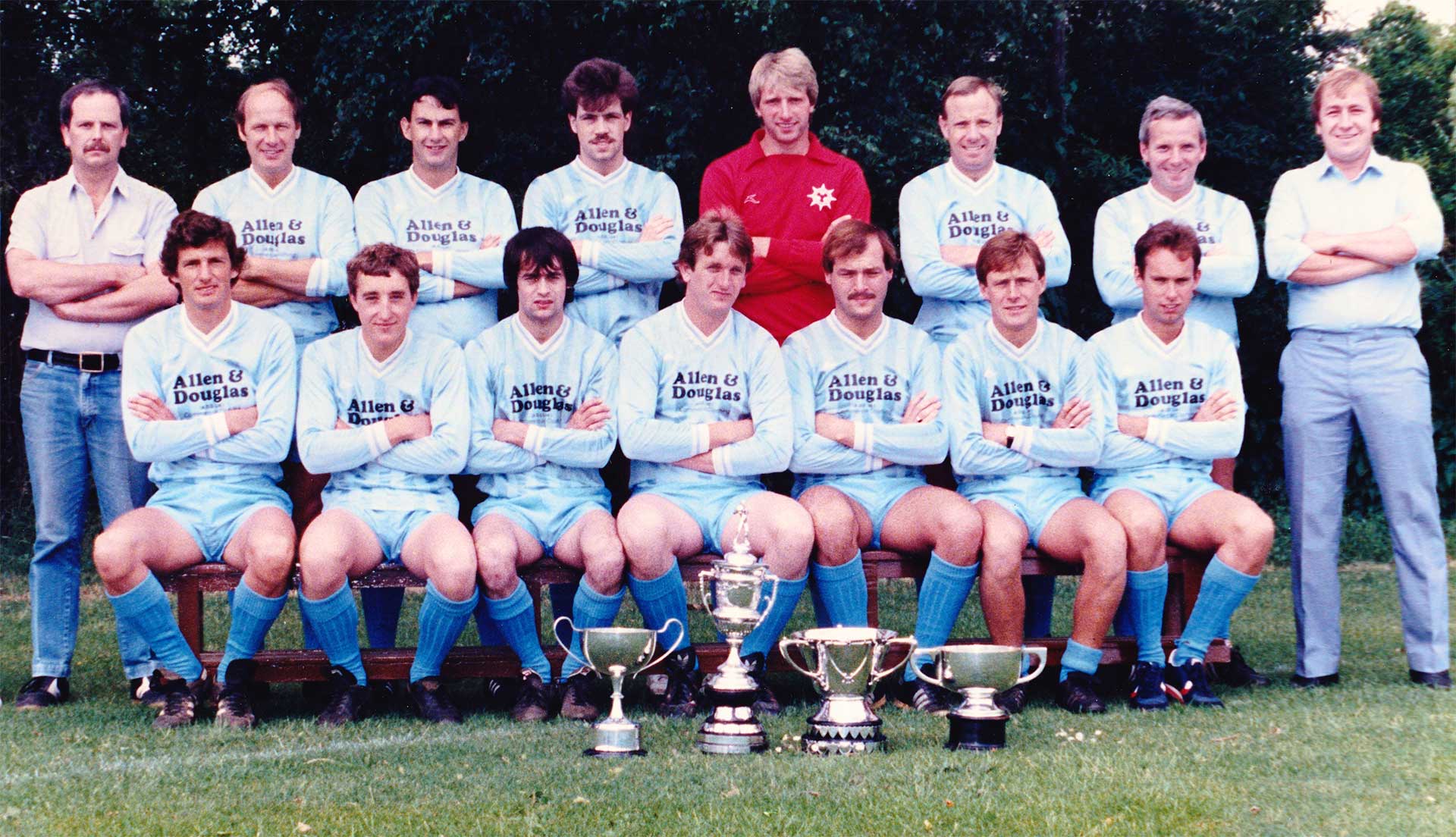 In the mid-1990’s the Club moved to the Oxfordshire Senior League, with one team in Division One and a reserve team in Division 2A. The reserve team subsequently moved back to the Banbury League several years ago, but in the 2011/12 season the Club will run three teams again for the first time in over 10 years, re-entering a third team in to the reserve section of the Oxfordshire Senior League.

The requirement for three senior teams has been driven by the very successful youth policy that the Club has adopted over recent years. Historically, the Club has always run junior teams since the 1960’s, but in the early 2000’s a concerted effort by a number of local dads who wanted a platform for their kids to play football, including long-standing committee members Steve Finch, Grahame Mitchell and Richard McMahon, saw the number of youth teams increase significantly, all playing their football in the Witney & District Youth Football League.

The Club was successful in achieving the FA Charter Standard in 2005, one of the earlier achievers of this award in the county at that time, and has continued to maintain this accreditation since then to ensure that it is seen as a club which is run to the highest standard both on and off the pitch.